Sean and I arrived at 10 Lothian two years ago with a few boxes of dishes that we’d found in my former apartment. We had two mixing bowls that I’d bought from Walmart when I was in college. My saute pans were a birthday gift from his parents from a year before, scratched and worn. The cookie sheets I’d packed were more burned than shiny, the dish towels greyed from years of wash and wear. We didn’t have any appliances, but we had one chef’s knife — a knife Sean bought from Star Market for $20 during his first year in Boston after realizing that he didn’t have anything to cut an onion with.

Our new kitchen was tiny, made up of four measly cabinets lined with no-longer-ivory paper and an oven that had seen better days. The sink was tarnished metal and the walls were splattered with remnants of the culinary ventures of tenants past. But it didn’t matter — I was smitten with the tiny space from the moment we walked in. No matter how shabby it was, it was the first kitchen that had ever belonged to me. 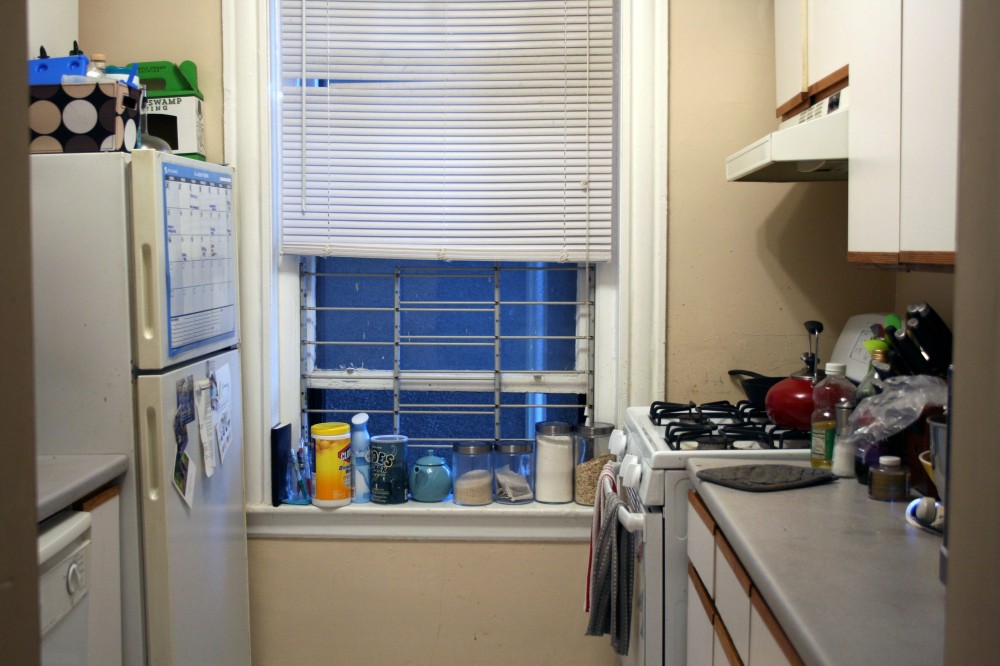 Next week we’re saying goodbye to this first Gritty Kitchen — splattered walls, tiny cabinets and all. And I’m reminded, as I pack, of all the fabulousness this space has inspired in me despite its inefficiencies. I cooked two Thanksgiving meals for 12 friends in this kitchen, complete with turkeys and gravies and pounds of stuffing. During the second Friendsgiving party, the kitchen got so crowded that a bottle of wine shattered on the floor — but I didn’t care. I learned to make bread in this kitchen, too (once we got a new oven), later inspiring dozens of my friends to bake bread each week.

I danced in this kitchen with Sean to Brown Eyed Girl right after quitting my job and realizing I would have time — actual time! — to launch this blog. I returned from my wedding in Puerto Rico and finally replaced our old found-dishes set with brand new plates and cups and silverware and bowls, thanks to my relatives and friends. After a long work trip in Manhattan, my husband Sean made french onion soup for me in our new wifi crockpot, setting the table with flowers and candles and wine. I made dozens of too-strong Moscow Mules for my book club ladies the night before the presidential election.

After a trip to Thailand, I came home inspired to cook with Thai flavors more often in my kitchen. I made hundreds of batches of cookies and brownies (like the ones below) and pasta salad and homemade chicken stock. Sean cooked breakfast for me at least twice every week, equating to dozens and dozens of plates of over medium eggs with extra crispy bacon. I also burned and undercooked batches of bread more times than I can count in this kitchen. I ruined several overly ambitious meals on evenings that ended in tears and frozen pizzas. Once, we roasted a chicken for two hours, with me eventually screaming that the thing would. not. cook. I ate a pint of Ben & Jerry’s instead.

Just like my recipes are my stories, my kitchen is also full of stories. This tiny, falling apart kitchen gave me the confidence to pull off a 12-person dinner party. It taught me that I’m not afraid to cook meat, that nothing is as cathartic as the smell of baking bread, and that when you’re at a loss for how to help someone, food is a universal language. This kitchen taught me that I am creative, strong, and organized. It taught me that the feeling of zen I get while cooking is something to search for, always, in other areas of my life. For me, there’s nothing that an evening in the kitchen alone, with classical jazz music in the air and a gin and tonic in my hand, can’t fix.

In one month, I’ll be introducing you all to my next Gritty Kitchen, a natural light-filled haven in the Portage Bay area of Seattle, where Sean and I are headed next. It’s a much-needed improvement on my current space, with loads of counter space and brand new appliances. But this little Boston hole-in-the-wall kitchen, the first kitchen I ever called my own, will always hold a special place in my heart.

Makes 16 brownies, or one 8-inch square pan. Recipe adapted from All Recipes.

Preheat the oven to 350 degrees. Grease and flour an 8×8 pan, or cover it with parchment paper. In a large saucepan, melt 1/2 cup butter. Remove it from heat and let it cool slightly, then stir in sugar and vanilla. Once the mixture is lukewarm to the touch, add the eggs and whisk until incorporated. Stir in cocoa, flour, salt and baking powder.

Spread the batter into a pan and bake for 25-30 minutes but no longer (overcooked brownies are the worst — let them stay fudge-y!). Cool slightly before digging in… or don’t.