Recently, my friend Dana told me that she was in a pasta rut. She’d made pasta for 3 dinners in a row and she needed something new to make for dinner, fast. Plus, it was spring and she felt like eating lighter, so she asked if I had any ideas. OF COURSE I HAD IDEAS. I wrote her a long email with some quick-hit dinner recipes she could probably make with the stuff she had in her fridge at that very moment.

Panzanella is an Italian bread salad with stuff in it, and it is the bomb. Italians use this salad to get rid of their stale bread, and you can probably make it right this minute with some of the stuff in your kitchen, as long as you have veggies of some sort + bread + dressing + cheese. Deb from Smitten Kitchen does 3 versions of panzanella based on what’s in season, which is how I learned to make this. I’ll put my version of panzanella on the blog soon, but until I do, here are the Smitten versions I love:

You can sub basically anything in for any of these ingredients, so just use the general idea. Hot tip: Add bacon. Also, topping this salad with a soft boiled or poached egg is a game changer.

So I don’t actually like kale, but somehow I like this kale salad. I fed it to Sean’s brother, who hates all green things, over Thanksgiving, and he even liked it. So if you think you hate kale… try this anyway. I promise it’s the perfect spring and summer salad. Plus, most kale salads will keep in your fridge for at least 2 days for lunch leftovers.
I always use this recipe as a starter (definitely make this dressing and follow the kale massaging instructions), but feel free to switch up the ingredients: http://cookieandkate.com/2012/debs-kale-salad-with-apple-cranberries-and-pecans/ I’ve done apples + kale + goat cheese + almonds, or grapes instead of apples, or even roasted mushrooms or squash or sweet potatoes instead of apples and almonds. Don’t have kale? Sub in arugula or spinach. Go wild.

The basics of my pasta salads are always the same: cooked pasta + cheese chunks + veggies (cucumber, tomato, peppers, red onions) + dressing + herbs. I love to have these salads in the fridge for an easy lunch, and Sean consumes them by the gallon. My favorite dressing can be found here: http://www.bonappetit.com/recipe/creamy-dijon-vinaigrette. Hot tip: Greens get slimy after a few days in the fridge, so don’t add them to your salad unless you plan to eat it fast.

Microwave or oven cook the sweet potatoes, then stuff them with all things good… beans, guac, cheese, salsa… or brown sugar and cinnamon. This is so easy and also full of the #health.

Lately, I’ve been obsessed with roasting veggies, especially broccoli, carrots and potatoes, and topping them with yogurt. Put olive oil, salt and pepper on the veggies before you put them in the oven at 400 degrees (you’ll need about 10-15 minutes for broccoli and carrots, and more like 30 minutes for potatoes — flip them halfway through).
When they come out of the oven, drizzle them with yogurt. You can put stuff in the yogurt if you want to get fancy, like herbs, lemon, garlic, jalapenos, and curry powder.

This is basically the same idea as above, but you make a yogurt sauce with greek yogurt + cilantro + jalapeno + garlic + salt and pepper. Drizzle the fish with olive oil, top with the yogurt mixture, then bake at 400 for 15-20 minutes, skin side down. 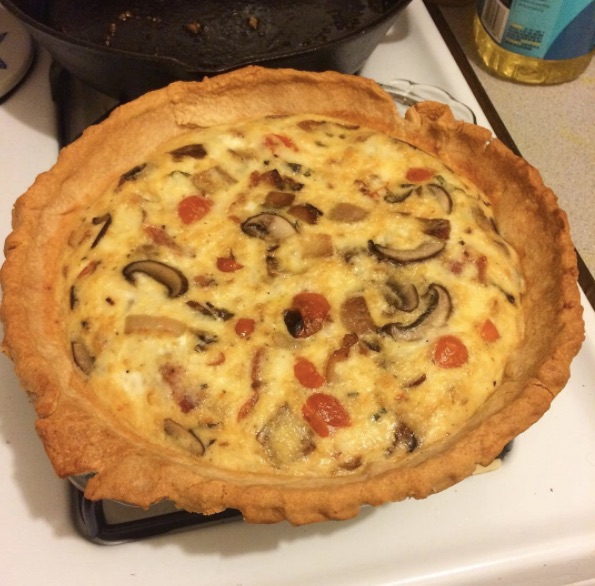 Buy a frozen pie crust (or make your own). Bake the crust according to the directions, then saute any veggies you have around (onion, tomato, pepper, mushroom, garlic) and put those in the bottom of the partly baked crust. Bacon is also a great decision. Whip 6 eggs in a bowl, add a dash (1 T) of milk, plus salt, pepper and maybe some cheese. Dump that on top of the veggies. Bake at 375 for 30-ish minutes, or until it doesn’t jiggle when you shake the pan.

Mix your veggies (I generally use mushrooms, red onions, tomatoes, and bell peppers, cut into chunks, but go with what you have) with olive oil, dried herbs (basil and oregano are a good place to start) and salt and pepper. Put them in a 400 degree oven for about 20-30 minutes, until everything looks brown and crispy. Use a big spoon to move things around halfway through. Then dump the veggies into a bowl, top with extra herbs, add a squeeze of lemon and some greens (spinach or arugula), and finish with lots of goat cheese. Stir. Eat on toast.
Hot tip: Italian sausage is a great addition to this dinner — just roast it in the oven next to the veggies on a sheet pan, then cut it into chunks and add to the bowl. This sausage will probably take 40 minutes to cook through in the oven.

I’ve been using this pizza dough recipe, which is basically a lower-quantity version of my no knead bread for busy people: https://smittenkitchen.com/2013/10/lazy-pizza-dough-favorite-margarita-pizza/
You could also buy pizza dough at the store, though. Anyway, once you have your dough, decide what you’re gonna do about toppings. Pesto + veggies + goat cheese is a great choice. You also can’t go wrong with mozzarella cheese and tomato sauce. I tend to add bacon to my pizzas, too, because bacon. If you have leftover sausage from that Roasted Veggie Salad with Goat Cheese, throw that on your pizza, too. We also love BBQ sauce + chicken + mozzarella cheese. Basically, open your fridge, look inside, and think about what you can use.
To construct the pizza, roll out the dough, then add sauce and toppings, plus cheese. Cook in the oven at 450 degrees for about 20 minutes.
Pro tip: Pizza freezes super well. To dethaw it, just put it right in the oven (straight from the freezer) at 400 for 10 minutes.

I’ve been making waffles for dinner lately, and it’s a game changer. I use this recipe for waffle batter (minus the sugar and vanilla), and I usually top the waffles with caramelized onions, avocado, cheese, bacon, green onions, and a fried egg — basically, whatever I have in my fridge. If you want to get fancy, you can put cheese in the batter before you put it in the waffle iron.
Pro tip: You’ll probably have more batter than you need if you use the recipe above, but you should make it all anyway. Throw the extra waffles in the freezer once they’ve cooled, then you can pop them in the toaster weeks later for a quick breakfast or dinner.

This, my friends, is the golden compass of easy but so-delicious-you-wanna-dance dinners. It’s also my favorite dinner of all time.
First, cook a few slices of bacon in one pan while boiling water for pasta in another. Cook your pasta according to the directions (you can use any kind of noodle, but spaghetti is usually the best). Saute some thin-sliced onions in the bacon grease, if you have onions on hand. Toss in some minced garlic if you have that, too. If you don’t have those things, no worries. Whip 2-3 eggs in a bowl. Grate parmesan cheese into a little mountain on the counter. When the pasta is done, use a measuring cup to reserve about 1 cup of pasta water. Drain the pasta. Add the pasta to the pan with the onions. Crumble the bacon on top. Turn the heat to low and add the eggs, and 1/2 cup pasta water, and a sprinkle of salt and pepper and maybe some dried basil, and the cheese. Mix with tongs. If it doesn’t feel sauce-y enough, add more pasta water. Sprinkle with extra cheese and eat more portions that you planned.
ENJOY 🙂